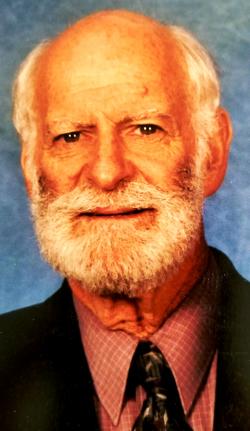 A Celebration of Life & Tribute  for Aubrey will be held Sunday July 7th from 2-4 p.m. in Goldboro Interpretive Centre.

Giffin, Lawrence "Aubrey" Age 89 of Malagash, Cumberland County, and formerly of Antigonish and Goldboro. The family of Lawrence "Aubrey" Giffin is sad to announce his peaceful passing on Monday December 3, 2018 in Colchester East Hants Health Centre, Truro. Aubrey was born on September 27, 1929 in Goldboro, to the late Parker and Lillian (MacArthur) Giffin. Aubrey left Goldboro at an early age, worked at Silver’s Dry Cleaners, Canadian Tire, Kadray’s Furniture Store, retiring from Mike’s Home Furnishings. Following retirement Aubrey moved to Wentworth, and then he and Faye settled in Malagash Point. Underlying the things he did and enjoyed in life was his love of music. He will be remembered for his quick wit, always ready to tell a joke or a story. Aubrey leaves to mourn his long time love and partner of 34 years Faye Henderson, Malagash; siblings Irene (Ed) Tremblett, Truro, Wayne (Vivian), Goldboro and Largo, Florida, Donalda (Ernie) Hafey, Antigonish; sisters-in-law, Laureen and Nina Giffin, nieces and nephews and their families, to numerous to mention whom he adored as they did him! He was predeceased by sisters, Dot (Ralph) Whittier, Rita, brothers, Oland, Robert; brothers-in-law, Earl Sponagle and Spurgeon Fraser.A private family burialwill be held Wednesday in the Bayview Cemetery, Goldboro with Lewis MacIntosh officiating. A Celebration of Life will be held in Goldboro at a later date. Memorial donations can be made to Hope for Wildlife. The family would like to express their sincere thanks to all those who helped over the past few difficult months. Our love for you Aubrey will live on forever. Funeral arrangements are under the dignified and compassionate care of G.W. Giffin Funeral Home Ltd., 17545 Highway 316, Country Harbour.  Online condolences may be made at www.gwgiffin.com.

"But O for the touch of a vanish’d hand, and the sound of a voice that is still." A.L. Tennyson