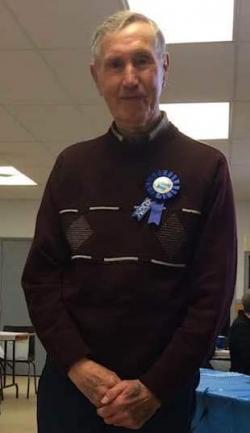 MUNROE, Morley Junior Age 83, of Whitehead, Guysborough Co., passed away on Friday, September 4, 2020 in Guysborough Memorial Hospital. He was a son of the late Albert and Leona (Peitzsche) Munroe. Morley was a Fisherman. He also served as a volunteer fireman with the Whitehead fire department for 35 plus years and continued to serve when it became the Three Top fire department. Morley was very devoted to his homestead and caring for his Mom for many years. He enjoyed singing and going to many variety concerts. He is survived by brothers, Eric and Howard, Halifax; Cyril (Mary), Mississauga, Ontario; sisters, Margaret Lohnes, Spryfield; Norma Clarke, Sackville;  many nieces, nephews, great nieces, nephews  and their families. He was predeceased by brothers, Lawrence, Edward, Murdock, Colin and Calvin. A graveside service will be held at a later date in Grace United Cemetery, Whitehead. Memorial donations may be made to Guysborough Memorial Hospital. Funeral arrangements are under the dignified and compassionate care of G.W.Giffin Funeral Home, 17545 Highway 316, Country Harbour. On-line condolences may be made at www.gwgiffin.com.