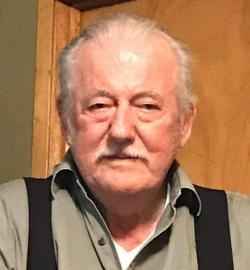 Wright, David "Edwin" age 75, of New Harbour, Guysborough County, went into the presence of his Lord on September 6, 2020. He was born in Guysborough, to Aubrey Carl and Elsie Jane (Sangster) Wright. Edwin started his employment at a young age, alongside his father, working at his dad’s mill in New Harbour, where he gained a love for the smell of freshly cut trees and lumber. He worked with the construction industry as a young adult driving trucks and a dozer operator, with various companies across Nova Scotia. He owned and operated his own business; Wright’s Lumbering, which was a saw mill and trucking company, employing numerous local people. One of the memorable trucks he owned and operated was "Sassy", a name given for its unforgettable engine roar. At the age of 30, Edwin accepted Jesus as his personal Saviour. He lived out the rest of his life serving his Lord and Master, being an example in his community and left a Godly Heritage for his family. He loved his children, his grandchildren and cared about their eternity. Edwin is survived by, his most precious jewel, his wife, Barbara Ann (Webber); children, Edwina (Peter) VanZoost, Lisa (Jamie) Barss Doiron, Jennifer (Barry) Rodenhiser, Jina (Dave) Jeans, Darren (Coleen), Jesse (Cheryl); grandchildren, Jake, Shara, Kelsey Chad), Isaiah, Dawson, Tinia, MaryAnn and Jason; sisters, Eva Pirie, Josephine Pinkham, Audrey (Elliott) Crooks; sister-in-law, Hope Wright; son-in-law: Shawn (Dorothy) Barss; many nieces, nephews and their families. Besides his parents, Edwin was predeceased by a daughter, Amanda Dawn; siblings; Earl, Lillian Simms, Marjorie Childs, John; brothers-in-law: Percy Pinkham, Grant Pirie, Ross Simms, Irving Childs. Social distancing protocols must be followed and masks are mandatory for the visitation and funeral service. Attendees will be asked to provide their name and contact information at the CommunityCentre. Visitation will be held Wednesday from 5 to 9 p.m. in Harbourview Community Centre, New Harbour from where funeral service will be held Thursday at 2 p.m. with Pastor Scott Chandler and Reverend David Wheeler officiating. Interment to follow in Riverside Cemetery, New Harbour. A reception will follow in Harbourview Community Centre. Memorial donations may be made to Cemetery Improvement Association, New Harbour. Funeral arrangements entrusted to G.W.Giffin Funeral Home, 17545 Highway 316, Country Harbour, NS. On-line condolences may be made at www.gwgiffin.com