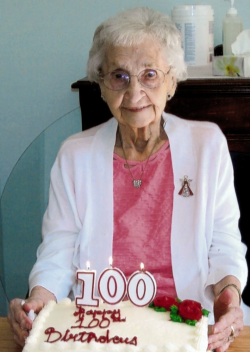 Cameron, Edith  Florence  Age  100,  of  East  River  St.  Mary’s, Pictou County, passed away on Monday, November 15, 2021 in High-Crest Sherbrooke Home for Special Care.  She  was  a  daughter  of  the  late  James  and  Ethel  (Rudolph)  Croft. Edith and George were married for 53 years and lived in East River St. Mary’s all of their married life. She worked in Liscomb Lobster Factory and cooked in many lumber camps. No one left her house without a cup of tea and a snack. George was very interested in local and family history, something Edith continued to enjoy. She was faithful  and  active  in  her  local  churches.  She was  "Ammie"  to  her grandsons and when they chose their life partners she became "Ammie" to them as well. She and "Ampie" were very proud of them and enjoyed every moment spent with  them.  Edith is  survived  by  her  daughter,  Mary  (Richard)  Kaley, Newtown; grandsons, Jarred, his wife Jennifer Kaley, Sambro Head; Luke Kaley, his fiancée Angela Boen, Hudson Bay, Saskatchewan; several nieces, nephews and their  families  as  well  as  a  number  of  cousins.  She was  predeceased  by  her husband, George Cameron; brothers, Lloyd Croft, Murdock Croft, Palmer (Myrtle) Croft; sisters, Myrtle Croft, Hazel (Stanley) Mason and half-brother Scott (Laura) Rudolph. Funeral service will be held at a later date. Memorial donations may be made to High-Crest Sherbrooke Home for Special Care or a charity of your choice. Funeral arrangements are under the dignified and compassionate care of G.W. Giffin Funeral Home, St. Mary’s Chapel, 34 Main Street, Sherbrooke.