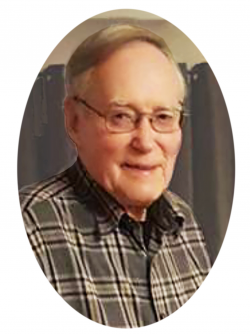 It is with great sadness that we announce the passing of Ernest J. Mitchell of Oromocto, NB and formerly of Argyle, Guysborough County,  who passed away on January 3, 2022 at the Dr. Everett Chalmers Hospital, Fredericton, NB. He was born in Antigonish, in 1929, a son of the late Roland and Hilda (Smith) Mitchell.

From a young age Ernest developed a sense of pride and hard work ethics. In his early years he held various positions of work in the mines of Ontario, shoveling coal on the boats of the Great Lakes, and pipe fitting under Niagara Falls. It was here in Ontario that he married Mary and started their family. They moved to Alberta and began raising their children. Ernest supported his family by driving for a propane company in Strathmore and eventually made their way back to his roots in Nova Scotia and their family grew. He began pipe fitting on the construction of the Heavy Water Plant in Glace Bay, Nova Scotia and eventually took a job with Stora Forest Industries as a heavy equipment operator where he retired after 20 years. He was a caring and loving son, brother, father, husband, neighbor and friend. In everything he did, his attention to detail and perfectionism was infectious. A wonderful quality his children will carry with them.

In 1998, Ernest married Carol Elizabeth. A caring and loving woman whom he was able to enjoy the latter part of his life with. They were inseparable and shared a very special loving bond.
Ernest was a master at being kind, gentle, honest, quiet and strong. He was someone to admire, follow, and respect, someone to be proud of and someone to brag about. His entire life was accomplished yet he carried himself so humbly. His kind and gentle manner will be remembered by all who had the pleasure of knowing him. He was a true gentleman.

A funeral service for Ernest and his son, Gary will be held Saturday, July 23rd at 2 p.m. in King's United Church, Loch Katrine with Lewis MacIntosh officiating. Interment will follow in Cummings Cemetery, Upper South River.

A reception will be held in the Goshen Communtiy Centre.

Memories– let them fill your mind, warm your heart, and lead you through.