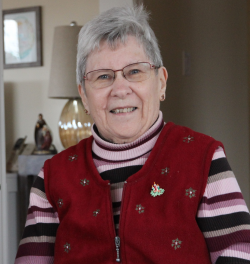 CADDELL, Carole Diane Age 79, of Dartmouth, and Goshen, Guysborough County, passed away peacefully on Monday, June 6, 2022, in St. Martha’s Regional Hospital, Antigonish. She was a daughter of the late Leo and Hazel (Carroll) Monahan. Carole was a proud community minded lifelong resident of Dartmouth. She believed in supporting her community and did so in many roles; as an inaugural parishioner of the Church of the Holy Spirit and a 50 plus year member with the Anglican Church Women, representing them by serving many terms as their President and Secretary. She reached out to her neighbourhood by canvassing door to door for local charities; volunteering in Dartmouth School Libraries and making, baking, serving, and coordinating many ACW tea and sales at the Church of the Holy Spirit. Carole began her career at the Bank of Montreal in Dartmouth, and her second career as secretary for Dartmouth School Libraries and then for the Dartmouth Teachers Centre from where she retired. Out of all her roles it was friends and family that she held so close to her. Her most significant role was raising her family; of which she was so proud. Having had boys herself, when grandchildren arrived, she wished for one to be a girl, and her wish was granted with three granddaughters to whom she was the absolute best Grammy. Carole enjoyed local history, especially relating to Dartmouth and the Halifax Explosion, puzzles, and knitting, always finding time to support her children’s activities and groups, from fundraising to sitting on committees. Carole enjoyed spending summers at the cottage at Pringles Lake, and later at their house in Goshen where she loved tending her garden. Carole and Myles faithfully attended King’s United Church during the summer months. She also attended their UCW meetings and functions. Activities at the Goshen Community Centre were always on her list as it was a great chance to share with her Goshen community. Carole is survived by her husband, Myles; sons, Bruce (Lisa), Dartmouth; Jeffrey (Carmen), Grand Desert; grandchildren, Taylor, Madison, and Nora; sisters-in-law, Joan MacLeod, Shirley Williams, both of Antigonish; several nieces, nephews, and their families. She was predeceased by brothers-in-law, Stewart (Lina) Caddell, Bud Williams, and Donnie MacLeod. Funeral service will be held on Monday, July 4, 2022, at 2 PM, in King’s United Church, Loch Katrine with Rev. Meredith Marple officiating. Interment will follow in Goshen Cemetery. Family flowers only please. Memorial donations may be made to King’s United Church Memorial Fund, Church of the Holy Spirit, Heart and Stroke Foundation of Nova Scotia or Canadian Cancer Society. Funeral arrangements are under the dignified and compassionate care of G.W. Giffin Funeral Home Ltd., 17545 Highway 316, Country Harbour. Online condolences may be made at www.gwgiffin.com.