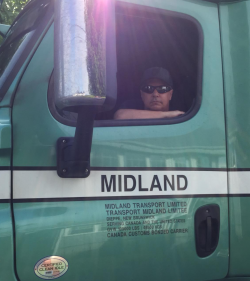 Laing, Steven Walter of Truro, NS, formally of Sherbrooke, passed away unexpectedly June 14th 2022. Born on January 19, 1966 to Ola and the late Jack Laing in Sherbrooke. A loving son, husband, father, brother, uncle and his proudest title "Grandpa". He loved his two girls Avery and Ada more than anything on this earth. Dad was a renowned family man dedicating his life to his wife, children and granddaughters. He was so proud of his family, and made sure he left a legacy for us to be full of life experiences and but most importantly full of love.

Dad was a man of many words, there was always a story to tell and places to see. Our dad could strike up a conversation with anyone, which resulted in having many friends all over the country. There wasn’t a place we could go that dad didn’t know someone. Faithfully every Saturday morning he made his round of phone calls from the truck to each family member to check in and see what was new this week. Always ending the call with "well that’s all I know" only to take a breather and start talking about something else for another 30 minutes.

When it came to dad no days were ever spent sitting idle, even after driving all week long it was nothing for dad to jump out of the truck into the car and onto his next adventure. If there was somewhere to see you better believe we were all up and ready to go at 5am to see it, as dad would say "better than sitting in the house". Our dad’s love for adventure and sightseeing allowed us to see and experience so many different places, which was then passed on to taking his granddaughters on adventures.

Dad was a jack of all trades; he could fix anything and if he couldn’t fix it, he knew someone who could. It might not have looked the prettiest but as long as it worked. Dad could usually be seen sitting at the race track watching the pro stock tours, keeping up with the Boston Bruins or catching a local hockey game at the arena. Making sure to leave that love of sports instilled in his children and grandchildren.

Dad got his class one license at the age of 18 from the commercial safety college in Masstown, where he then began a lifelong career doing what he loved; sitting behind the wheel of a big rig. During his career he wore many different hats, starting out with the Department of Transportation, then onto Miller Transportation; where he made many lifelong friends, Kaiser Marine, Seaboard, Midland, even going as far as Grande Prairie, Alberta to try his hand at working in the oil fields and lastly ending his career with Atlantic Freight Lines Ltd. His career allowed for many trips with his wife and kids in the truck from the coast of Newfoundland to downtown New York as far as South Carolina.

There will be no visitation or funeral as per dad’s wishes. Dad had a big heart and helped out whoever he could, over the years he befriended a gentleman in need, taking him for a hot meal and even going as far as giving him the winter coat off his back so he wouldn’t be cold. If you take anything from Dad’s passing let it be; always be helpful, loving and supportive to whoever you can and do something kind for someone in Dad’s memory.

We would like to give a special thank you to Shelley and Lewis at G.W.Giffin Funeral Home, Edmundston RCMP & Donnie Vincent for providing unconditional support for our family during this difficult time.

Arrangements are under the dignified and compassionate care of G.W. Giffin Funeral Home Ltd., Country Harbour.