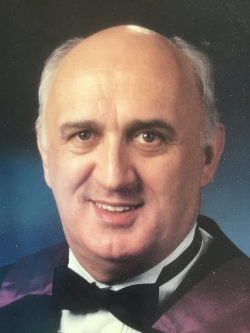 Visitation Information
Visitation
No Visitation or Funeral as per his wishes
Requested Charity
St. Mary's Memorial Hospital, Sherbrooke, do a good deed, lend a hand of help to someone
Print Obituary

Scott, John Olaf Age 79 of Sherbrooke, Guysborough County, passed away peacefully Thursday, July 21st in the RK MacDonald Nursing Home, Antigonish.  A wonderful place he called home for the past couple of years and where he was welcomed and cared for with love and made many friends. John was the only son of the late John and Anne (Pye) Scott, Sherbrooke.

John graduated from St. Mary’s Rural High School in Sherbrooke and went on to graduate from the first class of Respiratory Therapy at VG Hospital, Halifax in 1966 and then went on to develop the Department of Respiratory at the Halifax Infirmary.
In 1972 he moved to Ottawa and was a founding director at the new Children’s Hospital and held the position as Director of Cardio Pulmonary Services and Co-director of the Neonatal Transport Team as a Pediatric Respirologist.

During his 20 years in Ottawa he attended Saint Paul’s University part time and received his Bachelor of Theology and was subsequently ordained to the Anglican priesthood of Nova Scotia and Prince Edward Island in 1993.
He spent the next 20 years serving in the parishes of Port Dufferin, Kentville, Halifax
Cathedral and St. Augustine’s in Jollimore, NS from where he retired and moved back to his home in Sherbrooke.

He enjoyed his retirement, renovating his home, gardening on his property and entertaining
his friends from far and near. Loving sports he enjoyed his season seats to the St. F.X.
hockey and football games.

Following his graduation in 2015, he was assigned to Holy Redeemer Parish, Whitney Pier and was ordained to the Diaconate.

His final placement was at St. Ninian’s in Antigonish where he served as Deacon. At this time he sold his home in Sherbrooke and resettled in Antigonish.

John often stated that he loved and missed the call of the altar.

John thoroughly enjoyed being part of any family celebrations, whether it was his own or that of his many friends, especially the Brigley family.

John was an amazingly loving and generous Uncle and played a big part in all their lives.

He is also survived by his Aunt Muriel Scott, Dartmouth, and many generations of cousins.

He was predeceased by his sister, Mona and brother in-law, Jack Anderson.

Cremation has taken place and as per his wishes there will be no visitation or memorial
service.

In lieu of flowers any donations in John’s memory may be made to St. Mary’s Memorial Hospital,
Sherbrooke, or just do a good deed or lend a hand of help to someone along your way.
The family sincerely thanks all the staff of the RK MacDonald Nursing Home for the
excellent care and support John received while a resident there. It was very comforting to
his family and deeply appreciated.

Arrangements are under the dignified and compassionate care of G.W. Giffin Funeral Home Ltd.,

John is at peace.  "Peace Be With You"