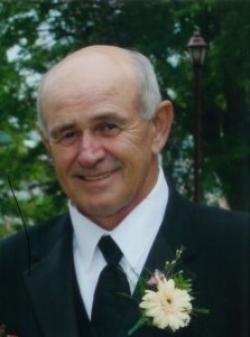 Cameron, Howard Ernest, age 78, of Lower South River, and formerly of Goshen, Guysborough County passed away peacefully on Sunday, September 18, 2022 in the Palliative Care Unit of St. Martha's Regional Hospital, Antigonish. Born in Pictou on March 13, 1944, he was a son of the late Alexander and Thelma (Fenton) Cameron. He had fought courageous battles with both heart failure and esophageal cancer. Howard spent his early years in Goshen, starting his adult life in Brantford Ontario, where he was employed by Massey Ferguson Combine Plant. He was joined by his teenage love Glenda, who he married and they started a family. After 10 years he decided Nova Scotia was where he wanted to live and raise his family so he returned "home" in 1974. In the beginning he held various jobs, then settled on truck owner/operator, hauling pulpwood for Stora Forest Industries. He was loving, caring and gentle. His family was his life and he showed them his love every day. Family and friends will always remember him for his humour and quick wit. He got a great kick out telling them fibs and then laughing at their reactions! A hard working man, he spent long hours doing just that; but they were very active socially and had a large circle of friends. He loved vacations, travelling and sharing many good times with Glenda and family. Many summers were spent at their cottage in Eight Island Lake, and in later years winters were spent at a much loved home in Zephyrhills, Florida. He was passionate about his pressing irons collection. Always saying "no more" but there was always one more! Howard is survived by his loving wife, Glenda (Sutherland); children, Bonita Lynn Rose (Tony); Suzette Marie Jordan (Colin); Jason Howard (Stephanie) and Jody William; grandchildren, Shealyn, Andrew; Tara, Wyatt, Caleb; Isaac, Clara; Sophia, Simon; great-grandchildren, Chloe and Kayden; brothers, Doug (Rosa) Dort, Everett (Janie) Dort, Clarence Dort, Ernest "Jack" Cameron, Chris (Heather) Cameron; sisters, Marina (Donald) Smith, Diane Pettipas, Maxine (Dave) Mills, Sandra Murphy, Jill Cameron (Basil), Gwen (Joey) Muise, Kelly (Doug) Pilon, Wendy (Johnnie) Pettipas, Tammy (Bob) Dillabough, and his fathers, second wife, Mildred. He was predeceased by his brother, Anthony in infancy; brothers-in-law, Russell Murphy and Leo Pettipas; sisters-in-law, Angela Cameron and Jacqueline Dort. He was forever grateful for the Sutherland family, who took him into their hearts and loved him as a son and brother. His "baby girl", shih tzu, Buffy held a special place in his heart. She is missing him. Howard’s wife and family give thanks to Thoracic Surgery Halifax, the Cape Breton Cancer Centre and Palliative Care Unit at St. Martha’s Regional Hospital. From the heart, thanks to Dr. Martin Eckhart and Dr. Amy Hendricks. Anyone wishing to have a drop-in visit in honour of Howard and offer condolences to his family are welcome on Sunday, October 2, from 1:00 to 4:00 p.m. in the Goshen Community Centre. With no service of any kind, just come have a coffee or tea and pass your love along! Family flowers only please. Donations in Howard's memory may be made to a charity of your choice. A private family graveside service will be held in Evergreen Cemetery, Cross Roads Country Harbour with Lewis MacIntosh officiating. Arrangements are under the dignified and compassionate care of G.W. Giffin Funeral Home Ltd., Country Harbour.